This is our review of Hide My Ass! (HMA!) VPN based on our real tests from China. Please note that HideMyAss VPN’s website is currently blocked in China. Besides this HideMyAss VPN review, we have also reviewed a number of other VPN services. If you are looking for a reliable VPN services to be used in China, Please also read our list of Best VPNs for China. If you are interested in using VPN outside of China, you can take a look at the List of Best Global VPNs.

Hide My Ass! (HMA!) is one of the very popular VPN providers with world-wide customers. It has servers in many locations around the world and it supports all major VPN protocols.

HMA’s main website, hidemyass.com is currently blocked in China. If you want to sign up, you might have to use a VPN service to visit their website, or sign up from a country where it’s not blocked. However, once you’ve signed up and downloaded their VPN client, you can use HMA!’s VPN service from China.

It should be pointed out that HMA has a few VPN servers in China. It’s for sure that these China servers won’t help Internet users in China to bypass blocking. However, if you live outside of China and you’re interested in getting a China IP address so that you can access China-only contents such as YouKu video, Tudou video etc., you can connect to HMA’s China VPN servers to do that.

HMA! Pro VPN has over 900 VPN servers, located in 340 locations, across 210 countries, including U.S., UK, Hong Kong, Japan, Taiwan, China and many more. It supports a number of connection protocols: PPTP, L2TP and OpenVPN.

The price for HMA! PRO VPN starts from $6.55/mo (if you pay annually). It doesn’t offer free trial, but instead offers a 30 day money-back guarantee, which is a pretty long period of time for testing out their VPN service. Please note that to qualify for a full refund, you should not use more than 10GB of bandwidth and shouldn’t exceed 100 session (the number of times you have connected to HidMyAss VPN).

For simultaneous connections, HMA! Pro VPN allows users to connect to up to 2 devices at the same time. 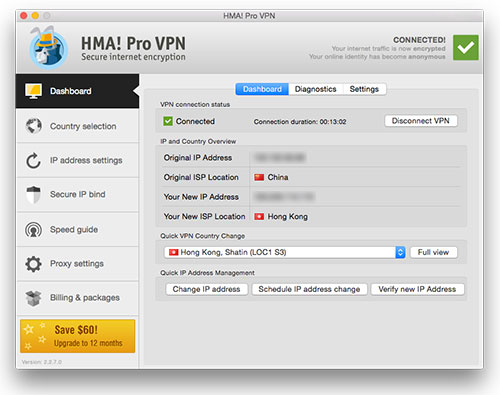 Hide My Ass! VPN provides software for many platforms, including Windows, Mac, Linux, IOS, Android etc. We downloaded their desktop client for Mac OS. The installation process was straight-forward and the software interface is clean.

With the desktop software, you can connect/disconnect to VPN and also change servers from different locations or countries.

When the HMA! Pro VPN client software is running, an icon will stay on the menu bar (or called system tray on Windows), and it will indicate whether you are currently connected or not.

Is HMA Pro VPN stable enough and fast enough to be used in China? For this test, we used a Mac computer from Beijing, China. Our ISP is China Unicom. Without VPN, we can get a pretty fast download speed of around 64Mb/s. Below is the SpeedTest.net test result without connecting to VPN. Please note: this speed only reflects the speed for visiting local websites within China. International speed would be much lower than that. We show this result only to give you a rough idea about how fast our current ISP is:

Then we used Hide My Ass!  Pro VPN’s Mac desktop client to connect to their Hong Kong server. We got a download speed of 12Mb/s, which is a decent speed.

However, the problem with using HMA! from China is that although they have a very large number of servers from many countries, most of them are not reachable from China. Using the tool provided by HMA!, we did a speed test for their severs. It turned out that most of the connections timed out.  There was only a small number of servers that could be connected to from China, including some servers from Hong Kong, Taiwan etc.

On HMA!’s website, there’s a live Chat window where you can connect directly to a customer service representative. We tried getting help using the chat window and were able to connect to a support representative immediately. We got our questions answered using this method. we found Hide My Ass! VPN’s customer support was very fast and helpful.

Hide My Ass! (HMA!) is one of the big VPN providers, with a large number of servers across a large number of countries. However, their main website is blocked in China, making it difficult to sign up for their service. You can use a VPN to visit their site to sign up, or sign up HMA! from outside of China. Once you’ve signed up and installed their VPN software, you can use it in China. But many HMA!’s servers are not accessible from China, which limits the number of choices for connecting to a working server, which is another major problem for using HMA! in China. For these reasons, we don’t think HMA! should be your first choice for selecting a VPN to be used in China at this moment.