As an international provider of on-demand Internet streaming media, Netflix has becoming more and more popular in recent years. Currently it’s available to viewers in many countries and locations, including North America, South America, New Zealand, Australia and a number of countries in Europe. If you are visiting China or staying in China, however, you can’t watch Netflix directly as you did in your home country.

Is Netflix Blocked in China?

China is known for blocking a lot of websites, such as Google, YouTube, Facebook, Twitter etc. However, the case with Netflix is a little bit different. Netflix’s website is not blocked in China. But you still can’t watch Netflix directly in China.

The main reason for not being able to watch Netflix in China is that Netflix has not opened its service to China (yet). Netflix uses a technology called geo-blocking, with which it can detect which country you are currently in and shuts it door to you if this country is not supported yet. If you visit Netflix’s website in China, you will see this message:

However, according to a recent report, around 30 million monthly users watch Netflix from countries where it doesn’t offer service. This includes around 22 million users in China. This is not a small number. How can those people watch Netflix in China?

How to Watch Netflix in China?

The answer is using a VPN (Virtual Private Networks). People use VPNs for different purpose: to bypass Internet blocking and censorship, to ensure security privacy when accessing the Internet and to bypass geo-blocking. For most Internet users in China, the purpose of using a VPN is to bypass content blocking by the so called Great Firewall of China so that they can access blocked contents such as YouTube, Twitter, Whatsapp, Facebook, Google Maps, Apple App Store, Google Play Store, Google Maps etc.

However, you can also use a VPN to bypass geo-blocking in China. By using a VPN service, you can disguise your current location and pretend you are visiting Netflix from a location where its service covers, for example, the United States. In this way, Netflix will think you are really in the United States and thus allow you to watch.

How to Choose a VPN to Watch Netflix in China?

Free VPNs Are Not Good for Watching Netflix in China

For watching Netflix in China, we wouldn’t recommend using free VPNs for the following reasons:1) Many free VPN services are not secure or reliable. 2) Most free VPN services will limit the speed and the amount of data you can use.

Instead, if you want to watch Netflix in China on a regular basis, you should consider using a reliable paid VPN service, which usually offers faster speed and unlimited usage. Some VPN services are really cheap. Most of them even offer VPN trials for you to test out their VPN services for free.

Things to Consider When Choosing a Netflix VPN for China:

When you choose a VPN for watching Netflix in China, you need to consider the following:

How to Use VPN to Watch Netflix in China:

Once you have signed up for a VPN account, you need to install a VPN client software on your computer or mobile devices, or you can set up VPN connections manually. There’s one important thing you have to remember when using a VPN to watch Netflix in China: you need to connect to a server located in the correct country. For example, if you want to watch Netflix shows for the United States, you need to make sure to connect to a VPN server in the United States.

Usually most VPN software has a location picker, witch which you can choose which server to connect to. For example, if you are using ExpressVPN’s desktop software, you can use the location picker to select a server in the U.S. (see picture below). For watching Netflix in China, I’d suggest you pick a U.S. server located in the west coast, for example, in Los Angeles, which will provide faster speed. 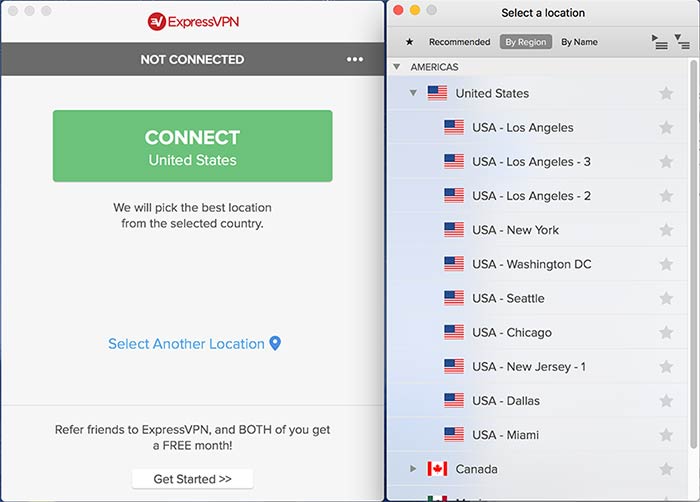 Currently you can’t watch Netflix directly in China, mainly because Netflix has not opened its service to China yet. However, you can use a VPN service to bypass Netflix’s geo-blocking and watch Netflix in China. Make sure you choose a good China VPN service for the best watching experience.