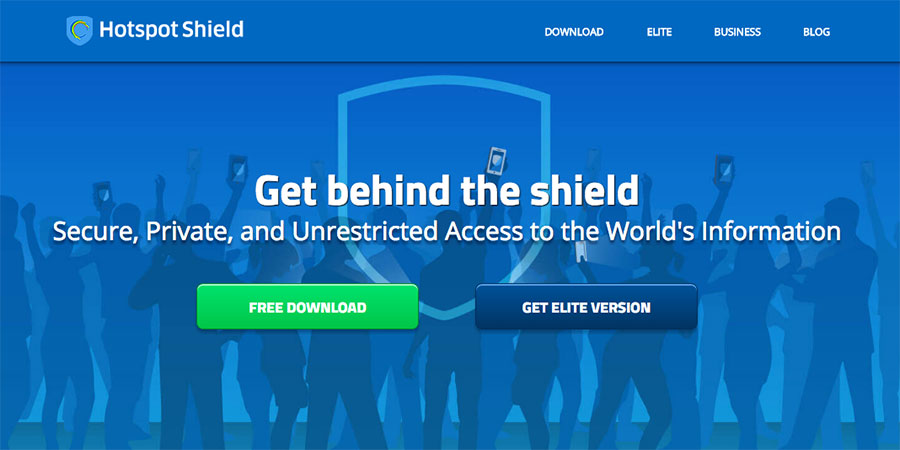 Differences Between Hotspot Shield’s Free VPN and Its Elite VPN:

Elite users do not see sponsored ads, can use Virtual Locations to switch countries to access, and can have unlimited usage and access to content (Free users have certain limits). On top of that, Elite users get Elite-only server pools to make the connection faster and content unblocking more reliable.

We all know that many websites and services are blocked in China, including Google, Twitter, Facebook, Google Maps, YouTube, Reddit, Google Play Store, Whatsapp and many more. In addition, China has been actively blocking VPN services and using a VPN in China is barely legal.

Hotspot Shield Elite VPN uses its proprietary VPN protocol and connection algorithms, along with a high level of obfuscation, to make VPN blocking harder. This is a good feature for users in China, where VPN connections often get blocked or interrupted.

Server Locations: Hotspot Shield Elite VPN has servers in 22 countries, including US, UK, Canada, Japan and Hong Kong etc. It’s interesting that one of its server locations is China. While its China location might not be a good choice for unblocking websites from China, it can be used for the purpose of VPN into China – getting a China IP address when you are not in China.

VPN protocols: Hotspot Shield Elite VPN uses its own proprietary VPN protocol, which is “faster and more secure and harder to get blocked by censorships”. It also supports OpenVPN and IPSec as backups.

Simultaneous Connections (Multi-logins): Hotspot Shield Elite VPN allows up to 5 devices to be connected at the same time.

Logging: Hotspot Shield Elite VPN does not keep user logs, which is a good feature if privacy is one of your top concerns.

Hotspot Shield VPN has a free version with limited features and displays some ads. For its paid version, called Hotspot Shield Elite VPN, the price starts from $2.08/month (if you pay for two years). Its 1 year plan costs $29.95. The 6 month plan costs $19.99 and its monthly plan costs $11.95/month. 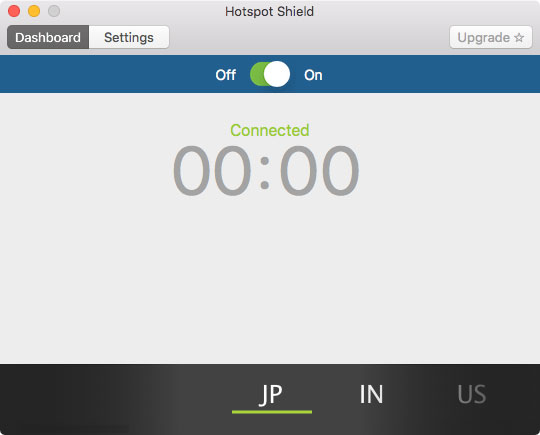 Hotspot Shield Elite VPN offers software for Windows and Mac. In addition, it has apps for iOS and Android, available from Google Play and the Apple App store.

We downloaded Hotspot Shield Elite VPN’s desktop client for Mac OS. The installation process was straight-forward and the software interface is clean and intuitive.

With the desktop software, you can connect/disconnect to VPN and also change server locations.

Is Hotspot Shield Elite VPN stable enough and fast enough to be used in China? For this test, we used a Mac computer from Beijing, China. Our ISP is China Unicom. Without VPN, we could get a download speed of around 81Mb/s. Below is the SpeedTest.net test result without connecting to VPN. Please note: this speed only reflects the speed when visiting local websites within China. International speed would be much lower than that. We show this result only to give you a rough idea about how fast our current ISP is:

Then we used Hotspot Shield Elite VPN’s Mac desktop client to connect to its Japan server. We got a download speed of 37.54Mb/s, which is quite fast.

We have also tried connecting to Hotspot Shield Elite VPN’s other server locations. Its Hong Kong server also offers very fast speed. However, we have run into some occasional connection problems (connection time-out) for some  servers.

Currently Hotspot Shield Elite VPN doesn’t offer live customer support. To get support, you can use their online form to leave a message.

If you are looking for a good VPN services to be used in China, Please make sure to read our list of Best VPNs for China Internet Users :